NovaPump Neuro is a stimulant free pump focused pre-workout. This does not have stimulants like in most pre-workouts we have available here on the website. 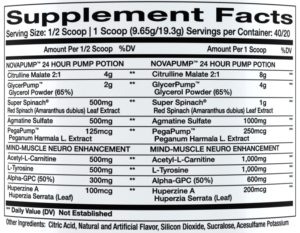 NovaPump Neuro is the same as NovaPump, but with over 2.6g of added nootropic ingredients.

We see L-Carnitine on many labels for many reasons, but when we see Acetyl L-Carnitine, we first think that the formulator is leaning towards focus. Also known as ALCAR, this is the form of the ingredient that can cross the blood-brain barrier,[1] which makes it the form most commonly used in nootropic-driven formulas like NovaPump Neuro.

Backing the bus up a bit, L-Carnitine is the compound that’s responsible for shuttling fatty acids to your cells’ mitochondria.[2] These are the “powerhouses” of your cells that create your body’s energy currency, known as ATP (realize that your cells don’t deal with “calories”, they use ATP and need it to survive).

L-Carnitine supplementation is massively important for those who don’t eat meat, since that’s where it’s primarily ingested. But given the BBB-crossing potency of Acetyl L-Carnitine, even meat eaters seem to benefit from the added brain gains when taking supplements that include it in solid doses such as this one.
No ALCAR means your Alpha GPC is less useful

If you’re low on acetyl groups, your choline (from Alpha-GPC) may not get to the acetylcholine that you want. ALCAR helps with that bottleneck.
ALCAR can then act as an acetyl donor, which goes on to help produce more acetylcholine, which is discussed below with the Alpha-GPC ingredient. Without ALCAR around, choline doesn’t get acetylated into acetylcholine by the choline acetyl transferase — we need ALCAR to get more of the “learning neurotransmitter” we’re so excited about with Alpha-GPC!
With that mechanism at hand, research has shown carnitine to have a wide variety of neuroprotective, neurotrophic, and antidepressive effects.[3] It has further research improving brain synaptic response,[1] enhancing learning ability,[1] and helping to defend against the decline in brain functioning![4]

L-Tyrosine is a unique, conditionally-essential amino acid with several functions, many of which are neurological.

The body uses tyrosine to create several critical neurotransmitters, including dopamine (the “feel-good” one that we all love), adrenaline, and noradrenaline.[5] Supplementing tyrosine ensures that you’re not “bottlenecking” the creation of these, which go on to heighten cognition, especially during active moments (such as workouts).

In 2015, a study found that subjects given tyrosine were more capable of completing mental tasks, and more efficiently to boot.[6]

Further, Tyrosine is a precursor to thyroid hormone,[7] hugely important to have on the ready for a healthy metabolism, especially when you amp up the training.
The dosage is just right – 500mg is what we consider the “minimum”, but too much (such as in the multiple grams worth) has actually made us feel anxious. The 0.5-1.5g range is perfect.

Alpha-glycerophosphocholine, better known as Alpha-GPC, is a phospholipid that’s rich in choline.[8]

This strength-boosting nootropic promotes the generation of acetylcholine in the body,[9] which we alluded to as the “learning neurotransmitter” up above in the ALCAR section. It’s critical because it helps your cells maintain their membranes, but here we’re most interested in getting focused with high amounts of acetylcholine,[10] synergized of course with ALCAR. Acetylcholine is a key neurotransmitter in regulating brain function and even muscle control,[10] which is why we love to discuss it with regards to the “mind muscle connection”.
There are several forms of choline on the market, but Alpha-GPC is superior to cheaper forms, mainly because the lipid makes it easier for cells to absorb… and thus making it boost acetylcholine more effectively.[11]

Boosts acetylcholine production — in the frontal cortex
In terms of that acetylcholine increase, it seems to happen most specifically in the frontal cortex,[12] which houses the motor function and attention management controls[13] — exactly what we want for that “mind muscle connection”. Other reported benefits include memory-formation improvement[14] and long-term cognitive health.[15]

A small 2008 study that was randomized and double-blinded showed that seven young men who were experienced in weight training had a 14% increase in bench press force and even a boost in peak growth hormone![16]
In that study, they had taken 600mg Alpha-GPC 90 minutes before performing Smith Machine squats and bench press and had their resting metabolic rate (RMR) and respiratory exchange ratio (RER) measured before performing three sets.
With regards to bench, the effects weren’t statistically significant, but the results “trended” in that direction, but it’s always been leg day increases that seem to hit the most significance.
More power increase data!

Alpha GPC isn’t just good for enhancing brain function, it can also deliver some big strength gains (when dosed at 600mg).
Another study was performed in 2016, and college-aged males were given 600mg Alpha-GPC or placebo for six days.[17] They performed mid-thigh pullsbefore and after the period, and the Alpha-GPC group hgad increased force on the mid-thigh pull. Once again, leg day gains! Upper body strength also increased vs. placebo, but not enough to claim statistical significance.
All in all, this is exactly what you want in a stimulant-free pre workout supplement, and NovaPump Neuro is using the clinical dose and labeling it properly (with the 50% designation).

With ALCAR and Alpha-GPC combining to increase acetylcholine levels, we now have to keep them around. This is where Huperzine A comes in – to play “defense”.

It works by inhibiting the enzyme acetylcholinesterase,[18-20] which breaks down our acetylcholine — so we want to limit our limiter and keep our focus and enhanced muscle contraction around later. Huperzine A has great oral bioavailability and can cross the blood brain barrier as well.

It’s even been shown to be neuroprotective against glutamate and peroxide induced damage – it literally helps prevent neuron cell death![21] And even crazier, Huperzine has research it can even help regenerate brain cells!![22]

To say this is a promising ingredient is an understatement, but the main point here in terms of your workout is that it’s going to make the Alpha-GPC + ALCAR combination work longer and stronger.

The ingredients in this section are the same as in the original NovaPump formula.
An easily-recognized nitric oxide pump ingredient in any formula nowadays, citrulline malate is a combination of citrulline and malic acid, in a 2:1 ratio as the label shows. This means you’ll get about 5.333g of L-citrulline inside, well beyond a clinical dose.
Citrulline is a precursor to arginine, which is the amino acid that increases nitric oxide production in your body.[1] While a beginner would ask “why not just take more arginine?”, research shows that arginine has poor bioavailability (it’s broken down by arginase in the gastrointestinal tract) but citrulline is more bioavailable. You actually end up with more plasma arginine by taking citrulline instead of arginine itself![23]
So why do we want that nitric oxide? Because it brings more blood flow throughout the body by relaxing the vasculature. This is how we feel many of the “pumps” in well-formulated nitric oxide boosting supplements like NovaPump and NovaPump Neuro. This ultimately gets you improved nutrient uptake, better recovery, improved exercise-based oxygen utilization, less fatigue, and even relieves soreness from training![24-27]
The research cited either uses 3g of citrulline or 6g of citrulline malate (yielding a bit over 3g actual L-citrulline), and with 5.333g of citrulline, we’re well above that.
A great start, but this is standard stuff. Soon we get into the new ingredients.

Glycerol is the backbone of triacylglycerols, and is primarily used as a hydration-enhancer. Previous forms of glycerol, such as Glycerol Monostearate, had lower yields and too much clumping. So when Pinnacle Ingredients brought GlycerSize to the market, we were interested due to their claims of still being a high 65% glycerol yield, but with less clumping.

Glycerol can help saturate muscle cells with water, assuming you take it with plenty of fluids. With more fluid in the cell, you get more “volumization” of the muscles![28] We often refer to this glycerol-induced swelling as the “water pump,” in contrast to the nitric oxide pump. The key is to take it with plenty of water!

Making our favorite muscle-bound cartoon character proud, Super Spinach is an extract of red spinach leaf that’s full of blood flow enhancers! It’s meant to compete with those beet root extracts, which sometimes are great but far too often are non-standardized and relatively weak.

What this means is that you should get even more blood flow alongside that citrulline, and with that comes the nutrient delivery, and theorized increased stamina / reduced fatigue. This also makes post workout nutrition more important than ever – even if you’re two meals out from your training, it’ll be important to keep your body full of high-quality, nutrient-dense proteins.

After the above ingredients, a healthy dose of agmatine makes good sense, especially in a focus-boosting stim-free pump product. Agmatine has been shown to inhibit arginase, which is the enzyme that breaks down arginine in the body.[31] Just like Huperzine A played defense for our Alpha-GPC choline boost, agmatine plays defense for citrulline and Super Spinach.


The Agmatine Pathway is complex, but that’s because it’s really more of a neurotransmitter / neuromodulator than just a “nitric oxide booster”.

As mentioned above, arginine is converted to nitric oxide via nitric oxide synthase. If we slow the breakdown of arginine, our bodies should be able to convert more of that citrulline-driven arginine to NO.
Brings some serious pontent N.O. boosting alkaloids [34]
PegaPump comes from Peganum harmala, a plant also known as Syrian rue.
When developing PegaPump, InnovaPharm focused on specific alkaloids such as Harmine, Harmaline, and Harmalol that promote vasorelaxation.[34]
With vasorelaxation, the blood vessels become less constricted, meaning they further bring more blood flow.

NovaPump Neuro is a very solid pump preworkout that also gives great focus. One of the best pump products that I have tried, and Nutri Cartel has the best prices and quick shipping.

snow cone flavor is great no chalky after taste the clumping is a bit of a pain cause I use a funnel for my travel bottle but other than that its good. Easy to slam down just before workout.

Taste is very good , and definitely gives me that extra I’m looking for when I’m working out.
The product is is tightly packed so it is very difficult to get the scope out of the container with spilling powder everywhere, and you can’t get the scoop back into the container once it is out. So I just leave the scoop on top of the container.
The product is also very clumpy not sure why..
I’m not sure if I will buy again..
Overall very good product and works well, great pumps !!!

Great pumps/great taste what else do you need to know…