This is a limited edition pre-workout collab between Huge Supplements and the Review Bros.

Beta alanine may support muscular endurance and can act as an a lactic acid buffer.

In pre-workouts, this is responsible for those tingles.

Alpha GPC is a cholinergic compound that is produced within the body. It is used for enhancing cognition and increasing muscle power output.

This is the standard form of caffeine. You know what it is. It delivers all of the expected benefits: mental focus, energy, motivation, a will to live, etc.

Eria Jarensis (N-Phenethyl Dimethylamine) is a stimulant that increases levels of dopamine and noradrenaline in the user and can enhance mood, increase motivation, and dial in concentration.

Caffeine citrate is a faster acting version of caffeine when compared to caffeine anhydrous. As such, it also wears off more quickly.

Hordenine (N,N-dimethyltyramine) is a stimulant that is often included in pre-workouts for its ability to extend the life of ingredients that elevate mood like eria jarensis.

Di-caffeine malate is the extended release version of caffeine, which can lengthen how long a pre workout lasts and help offset crash effects from caffeine anhydrous.

L-Theanine is a somewhat sedative amino acid, noted for promoting relaxation and taking the edge off of caffeine.

Higenamine is thought to have similar mechanisms to ephedrine, which has led to usage as a fat burner, though this is not well researched.

Grains of Paradise has some very promising research around it, but still needs additional evidence to support its fat loss effects. With that said, there is some interesting research that shows it can activate brown adipose tissue, which can help increase a body’s metabolism and lead to increased weight loss.

Paradoxine is a patented form of Grains of Paradise that is standardized to 12.5% 6-Paradol.

Like Alpha GPC, Huperzine A is a cholinergic that acts as a cognitive enhancer.

Bioperine is a patented form of black pepper extract. It helps with ingredient absorption.

Also known simply as Alpha Yohimbine or “Alpha Yo,” rauwolscine is a “love it or hate it” stimulant.

Never heard of this company before until my brother recommended them to me. I was in the market for new and amazing pre-workout, and these guys delivered with their Wrecked Extreme! Hands down the best pre I’ve ever had the pleasure of using. Insane focus, clean energy, and amazing pumps and recovery. I’ll be coming back for more! 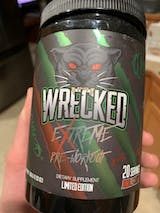 It mixes easily, and Jungle Candy tastes great! Wrecked Extreme does not make you jumpy and gives you long-term focus and clean energy so you can smash your workouts. You’ll feel alert and aware without the frenetic energy. Stack it with Sicario for insane pumps.

Love it amazing pump no crash at all !